Consolate Sipérius is a director, actress and performer. She graduated with a master's degree in dramatic art at the Royal Conservatory of Mons (Belgium), and has worked with various Belgian and international directors. From 2015 to 2021, she played her own role in the show “Compassion/l’histoire de la mitraillette” carried by Milo Rau. She recounts the memories of the war in Burundi in 1993 when she was almost 5 years old, and her adoption at the age of 7 in a city where being Black was rare. Touring around the world with this performance put her face to face with the inequality and racial domination of which she is a victim. Consolate is a woman, racialized, illegally adopted. The need to convey her story through art is urgent. Because it is that of so many others. Art repairs and leaves room for a common awareness: she decides to seize herself and appropriate her story by creating performances that invite the audience to be inside her story and research. Spaces that summon sensory memory and that invite human sharing above all. Raising awareness together means being inside the artistic process and research, in order to become aware of individual responsibility. Sharing to raise awareness. Creating to gather. Telling stories to repair. 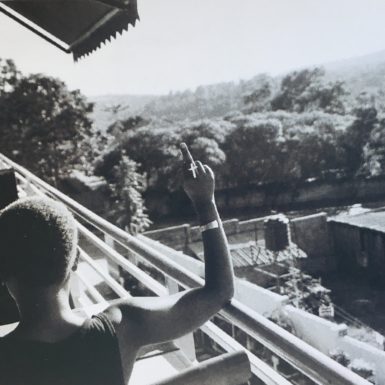